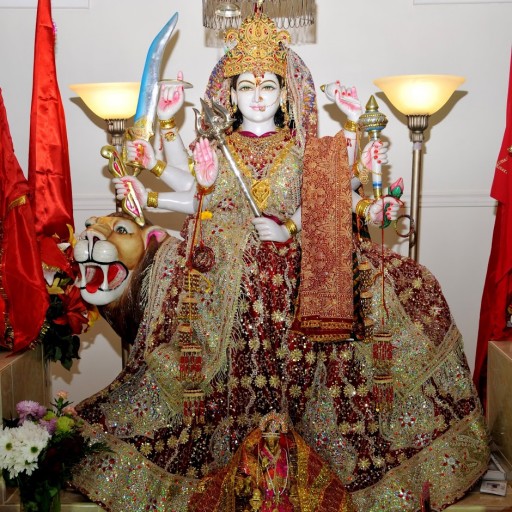 Mata devotees, Mrs. Leena Shukla and the late Mrs. Rama Juneja, originally conceived the idea of having a Durga Mandir in the National Capital Region of Canada. Thus, they became the two founding members of this temple. Inspired by their dedicated efforts, Mr. Surinder Sumra joined them and became a co-founder after a few months.

The name of the temple was suggested by Maharaj ji of India.

Pandit Ravindra Narayan Pandey ji was approached by the members and requested to accept the reins of the temple’s priesthood. Pandit ji brought on the needed impetus and initiated the performing of various services in mid-December, 1997. These included regular Sunday-services, other required services as well as services at devotee homes. The Community Center at Bellman Street remained the initial temporary location until May of 1998.

With the expanding membership, the temple found a more suitable location in the Community Center at the corner of Bank Street and Riverside Drive, and moved there in June of 1998. Due to ongoing renovations at the center, the temple had to move once again to yet another Community Center on Somerset Street East.

The relentless efforts of the devotees finally succeeded in finding a permanent home for the temple at its present location, 55 Clarey Avenue, where the devotees reshaped an old church into a vibrant temple in September 2005. During the following year, the auspicious Sthapana of the Moorties of Maa Durga and Shiv Ling took place.

Despite several moves and temporary locations, the services were never interrupted.

The temple is thankful to the wholehearted support of the most benevolent communities and devotees, individually as well as collectively, not only for their initial support but also for their continued support.

May Goddess Durga Bless All.